This ultimate collection presents the most remarkable short works of Junji Ito’s career, featuring an adaptation of Rampo Edogawa’s classic horror story “Human Chair” and fan favorite “The Enigma of Amigara Fault.” In a deluxe presentation with special color pages and color illustrations from his most recent long-form manga No Longer Human, every page invites readers to revel in a world of terror. END_OF_DOCUMENT_TOKEN_TO_BE_REPLACED

Hey guys! In the last couple of months I feel that I ended up hitting a bit of a slump. I am thankful that during June I ended up coming out of that slump. I felt like I ended up reading quite a lot of books in July. In the last couple of months I found myself wanting to only listen to audiobooks. I couldn’t really focus on actually reading. I finally have gotten back into my groove. Let’s dive in and see what I ended up reading in July! END_OF_DOCUMENT_TOKEN_TO_BE_REPLACED

Hey guys! So I have slowly been getting back into blogging. I have posted two reviews after being gone for a couple of months. I was originally thinking maybe I would do indiviual wrap-ups for those months. Then I saw Dora @Berries and Books do just a quick wrap-up of the books she has read since she’s been gone. I thought that would be fun. Thank you so much for the idea! Anyway, the last couple of months my reading has been very up and down. I finally have gotten back into reading which I’m super happy about. So July will have it’s own wrap-up at the end of the month. So let’s dive in and see what I read in the last couple of months! END_OF_DOCUMENT_TOKEN_TO_BE_REPLACED

Hey guys! I just wanted to give a quick update before I start my review. It’s been a while. I honestly been in a huge mood to blog since the beginning of March when COVID started happening. I really wasn’t reading a lot. I mainly was listening to audiobooks or reading comics. I feel I wasn’t into a lot of the books I read. Recently though I have been doing a lot of reading and really enjoying of the majority of books. So I’m happy to report that!

However I’m not sure exactly if I want to continue blogging. There has been so much happening and a part of me wants to read to enjoy books. I just want to read and not worry about reading and then right away having to put out a review. I’ve just been feeling a lot of emotions as of late. I’m sure there are others who have similar feelings. Another part of me really enjoys this aspect because I get to talk to so many wonderful and find out about so many wonderful books. I think I will post when I want to and not worry so much. I have stepped away from Twitter. I’m not on it as much as I use to be. I feel that’s what has been best for me. I will continue to come on here when I feel like it and want to post.

I just felt like a little update was in order. I hope you all have been doing well during these times. I look forward to hopefully posting more! 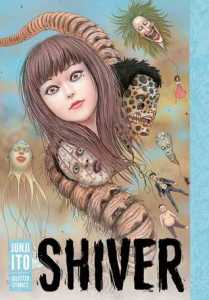 Synopsis: A best-of story selection by the master of horror manga.

This volume includes nine of Junji Ito’s best short stories, as selected by the author himself and presented with accompanying notes and commentary. An arm peppered with tiny holes dangles from a sick girl’s window… After an idol hangs herself, balloons bearing faces appear in the sky, some even featuring your own face… An amateur film crew hires an extremely individualistic fashion model and faces a real bloody ending… An offering of nine fresh nightmares for the delight of horror fans.

1. Used Record or Second-Hand Record (from House of the Marionettes, あやつりの屋敷 Ayatsuri no Yashiki), a story about people fighting over the ownership of a record that has a singer’s singing as they died recorded on it.
2. Shiver (from Slug Girl, なめくじの少女 Namekuji no Shoujo), a story about a cursed jade stone that causes holes to open up all over a person’s body if they’re around it.
3. Fashion Model (from Souichi’s Diary of Curses, 双一の呪い日記, Sōichi no Noroi no Nikki), a story about an oddly ominous fashion model.
4. Hanging Balloons (from The Face Burglar, 顔泥棒 Kao Dorobou), a story about balloon headed dopplegangers out to hunt their counterparts the moment they go outside.
5. Marionette Mansion (from House of the Marionettes, あやつりの屋敷 Ayatsuri no Yashiki), a story about a family who rather than deciding what they do or how they live, they instead hire puppeteers to control their actions via strings from the attic of their home.
6. Painter (from Tomie), a story about a strange but beautiful woman named Tomie who wishes for an artist to accurately capture her beauty, and all the misfortune that happens as a result…
7. The Long Dream (from The Story of the Mysterious Tunnel,トンネル奇譚 Ton’neru kitan), a story about a man who claims that the length of his dreams are becoming longer and longer and about how he begins to change as his dreams extend farther and farther.
8. Honored Ancestors (from The Face Burglar, 顔泥棒 Kao Dorobou), a story about an amnesiac girl and the encounter that caused her to lose her memories and about carrying on the family line. At all costs.
9. Greased (from Voices in the Dark, 闇の声 Yami no Koe, a story about oil and grease.
10. Fashion Model: Cursed Frame [new] END_OF_DOCUMENT_TOKEN_TO_BE_REPLACED